After 9 It’s Turtle Time On Sanibel and Captiva Islands!

On April 15, the Sanibel-Captiva Conservation Foundation will hit the beach, along with 17 of its volunteers, to begin searching for sea turtle nests. Through October, more than 100 volunteers will help survey and record the local nesting season, which ultimately leads to more conservation efforts on the islands.

While loggerheads typically arrive on the shores of Sanibel and Captiva in late April, SCCF anticipates an earlier nesting period this year due to the warm winter temperatures. 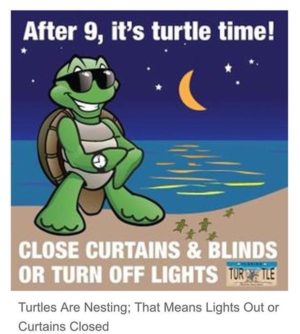 There are several things that individuals can do to help protect our ancient friends:

Just remember, the seven species of sea turtles that can be found today have been on the planet since the age of dinosaurs, or for approximately 110 million years. Let’s do our part to ensure their success.

For more information about sea turtles on and around Sanibel and Captiva Islands, go to http://whmp.sccf.org/sea-turtles/sanibels-sea-turtles/.