On Wednesday, May 17, one of the most popular celebrations for Sanibel residents returns: Sam Bailey’s Islands Night at Hammons Stadium. The family-fun event begins with a parade followed by a baseball game hosted by hometown team, the Fort Myers Miracle. Gates open at 5:30 p.m. and the parade begins at 5:50 p.m. The Miracle team takes the field at 6:35 p.m. against the Clearwater Threshers. 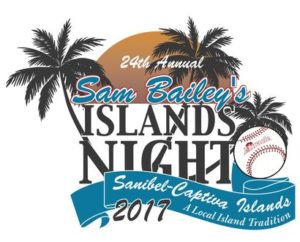 ands Night began in 1993 by Bailey as a means for him to show his appreciation to the community. The Sanibel-Captiva Kiwanis Club, the Sanibel-Captiva Rotary Club and the Young Professionals Association of Sanibel & Captiva will be on hand selling traditional ballpark food and drinks. Proceeds from this year’s Islands Night benefit the Sam Bailey Scholarship Fund – which is awarding three scholarships this year – along with select area non-profits.

Tickets are available at local businesses that sponsor the annual event, such as Bailey’s General Store, 2477 Periwinkle Way, Sanibel. Sponsorship of Islands Nights covers the cost of renting the stadium, allowing participating businesses to give away tickets to family, friends and customers. For more information, go to https://sanibel-island.sanibel-captiva.org/events/details/24th-annual-islands-night-26812.

Don’t miss out on this Sanibel-Captiva tradition!